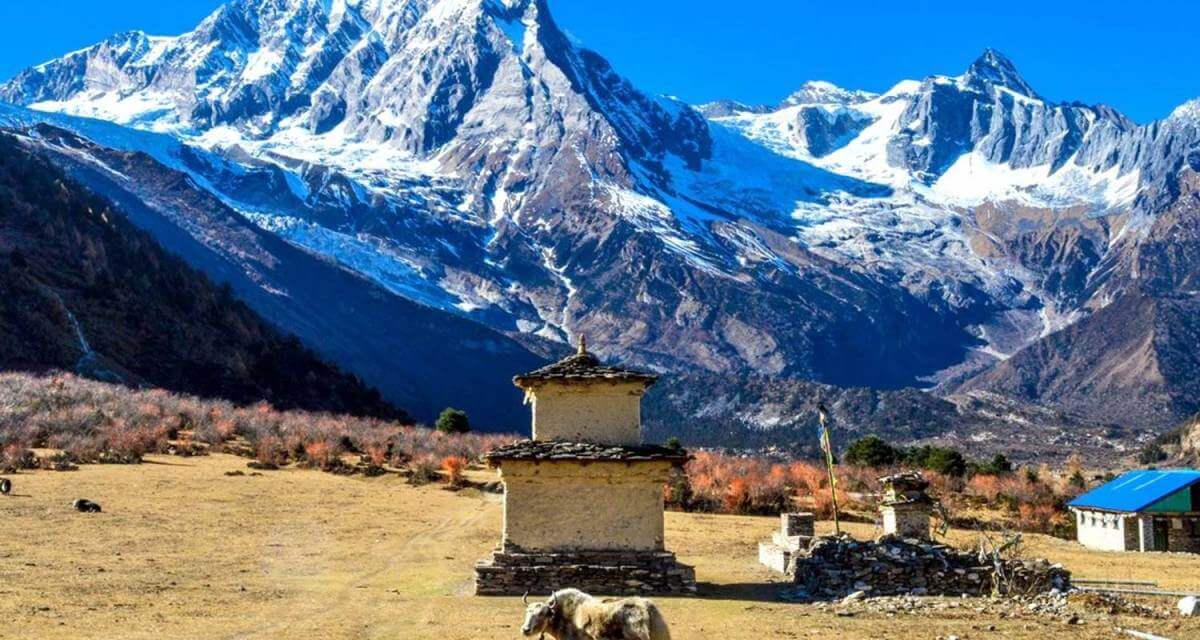 10 top reasons to trek to Everest Base Camp Trek, Mount Everest Base Camp is one of Nepal’s most popular hiking routes. During your voyage, you will be astounded by the breathtakingly magnificent landscape, varied terrain, and cultural diversity.

Despite the fact that there are various reasons to visit Everest Base Camp, we’ve compiled a list of the top ten:

Step into the base camp for Mt. Everest

Being the gateway to Mount Everest you’ll get an excellent opportunity to stall around the base camp while being on this trek which is the best thing that happens on this trek.

Mount Everest’s Base Camp, Imagine entering Everest’s base camp, climbing to a height of 5,380 meters, passing through lush rhododendron woods, over many suspension bridges, resting in various towns, and walking for at least two weeks to reach Everest’s base camp. 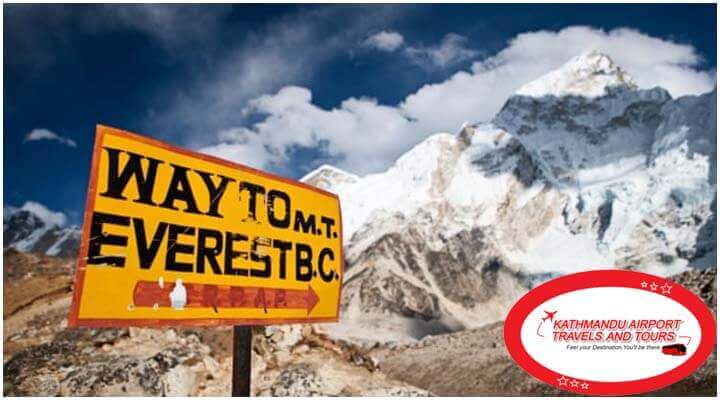 As they strive to reach Everest Base Camp, yaks and a legion of trekkers share the trail. Share your experiences with Sherpas and become immersed in the culture. Everest Base Camp provides spectacular views of Mount Everest.

It is a symbol of victory, hope, and dream for thousands of devoted travelers. The trip to Everest Base Camp is arguably the best adventure on the planet.

The best vantage point in the Everest region for a close-up view of Everest and the surrounding peaks is Kala Patthar (meaning black rock), which stands at 5,643 meters.

From a 360-degree vantage point, you can view Everest, Changtse, Lhotse, Pumori, and Nuptse. Despite the fact that Kala Patthar is an optional hike, most tour companies include it in the Everest Base Camp trek itinerary since it is worthwhile. 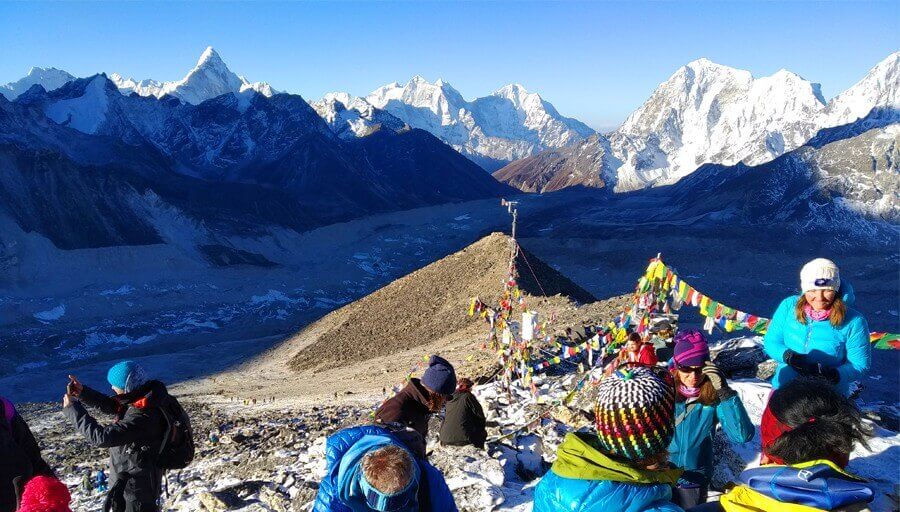 You’ll need to hike for roughly 2 hours from Gorak Shep. From Kala Patthar, the views of the Himalayas are breathtaking. It is not difficult to climb Kala Patthar, but the weather can make a major difference.

Rest certain, though, that each step is rewarding. Keep these suggestions in mind if you want to get the most out of your hike to Kala Patthar.

The Sherpa people live in the Everest region. Throughout the trip, you will learn about the different topography and the life that it supports. As we go from one Sherpa hamlet to the next, you’ll have the opportunity to learn about the local culture and way of life.

During your tour, you will learn about the highlander people, their way of life, culture, food, and hospitality. Sherpa people live on Everest, and magnificent Sherpa settlements can be seen there. 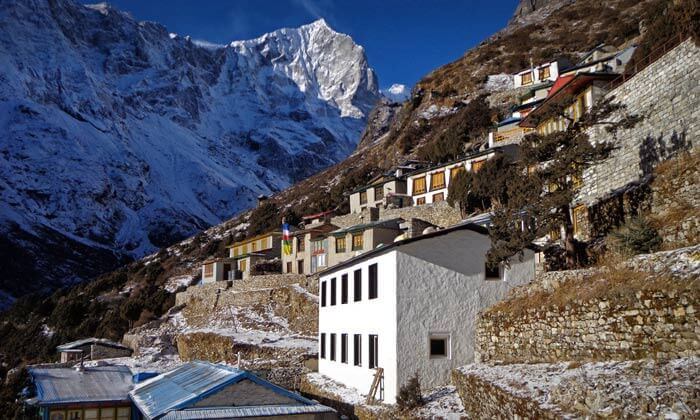 You will encounter Sherpa people and be charmed by their intriguing culture if you go on a trek in the Everest region, whether it is the Gokyo trip or the famed Everest Base Camp trek.

Sherpa people live in the Sherpa town of Namche Bazaar, as well as Lukla, Dingboche, and Gorak Shep.

It is a widely held belief that the best way to learn about a culture is to visit sacred sites. Mount Everest is littered with monasteries, gumbas, and Mani Walls.

Learn about Khumbu’s culture, history, and architecture by visiting these locations. Not to mention a visit to Tengboche Monastery, the largest and most revered monastery in the Everest region.

You will have a deeper grasp of Buddhist and Tibetan religion and culture by seeing the historic monasteries on Everest. 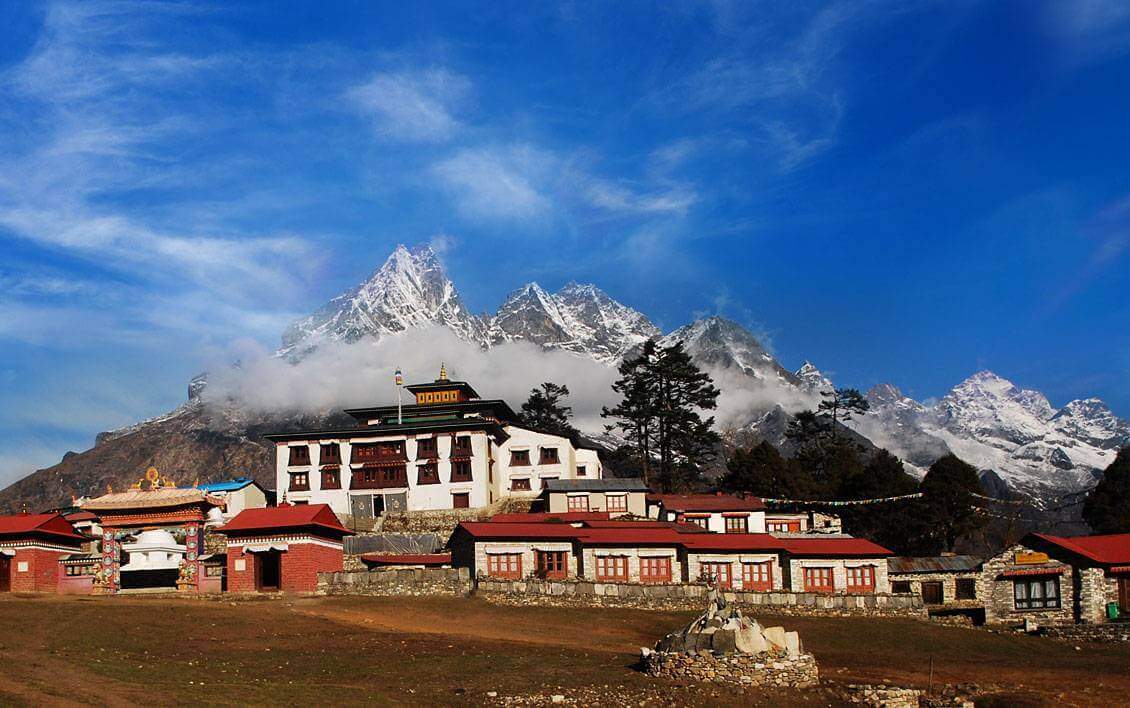 It is one of the most important monasteries in Nepal. Hundreds of trekkers visit the Tengboche monastery each year. It hosts the colorful Mani Rimdu Buddhist festival, which lasts nine days in October (autumn).

If you want to attend this festival, you should go in the fall. Tengboche is a necessary stop along the road to Everest Base Camp.

Overnight walkers will be accommodated in enough lodges and guest rooms. On your way to the Tengboche monastery, you may be able to witness wonderful views of Everest, Nuptse, AmaDablam, Tawache, Thamserku, and Lhotse.

Only one trekking route that exhibits four Himalayas above 8000 m

Seeing mountains is one of our top ten reasons for walking to Everest Base Camp. Every step you take in the Everest region is accompanied by a vista of some of the world’s tallest mountains.

On your way to EBC, you’ll pass by a number of 6000m and 7000m peaks. At every step, you’ll be greeted with photo possibilities.

Trekking through the highest Khumbu glacier & Khumbu Icefall in the world

In the Khumbu region, a large glacier-covered in debris lies between Mount Everest and the Lhotse-Nuptse ridge. On the right side of the glacier sits Everest Base Camp, which attracts thousands of hikers every year.

The most famous and frequently visited glacier in the world is the Khumbu glacier, which houses access to Mount Everest. 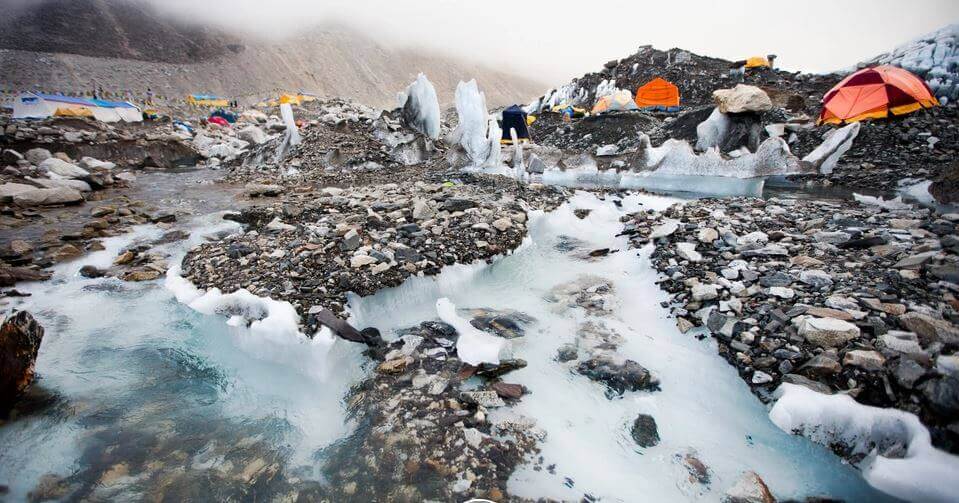 It is 12 km long and drains from western Cwm, not far from Everest. The Khumbu glacier has a Khumbu Icefall at the farthest western tip of western Cwm.

The Khumbu Icefall, a swift-moving torrent of constantly-changing ice not far from Everest Base Camp, continues to challenge and inspire mountaineers from all over the world.

Between 5200 meters (17,060 feet) and 5800 meters are its various altitudes (29029 feet). The icefall is situated close to the lower end of the Western Cwm on the Khumbu Glacier, one of Nepal’s highest and longest glaciers that extends for over 15 kilometers and begins high on the Lhotse Face at about 7500 meters (24606ft).

Due to this glacier’s swift movement, massive crevasses can quickly form. Additionally, seracs, or large ice towers, have been known to collapse suddenly, sending pieces of ice the size of cars to entire houses tumbling down the mountain.

Enjoy a stroll around Namche Bazaar.

The unofficial capital of the Khumbu region is Namche Bazaar, a Sherpa town. The “Gateway to Everest” is another name for it.

Namche Bazaar, at 3,440 meters, is a busy market that sells everything from trekking gear to Tibetan relics and trinkets, making it a mountain climber’s and trekker’s Disneyland.

Namche Bazaar can have stuff you didn’t get in Kathmandu (for your walk or tour). You can drink beer or whiskey when you’ve accomplished your quest.

Hotels, restaurants, a bar, an internet cafe, and a bustling Saturday market with breathtaking Himalayan vistas can all be found in Namche Bazaar.

Namche Bazaar is also an excellent area to acclimate before beginning the EBC journey. Make a visit to the Sherpa Cultural Center a priority.

Sagarmatha National Park, one of Nepal’s ten UNESCO World Heritage Sites, was established in 1976. The park is home to endangered species such as the snow leopard, musk deer, red panda, and Himalayan black bear, to name a few.

At such a high altitude, Sagarmatha National Park is also home to over 100 different bird species, making it a genuine bird-watching paradise. The Himalayan monal, crimson pheasant, and red-billed chough are among the birds that can be spotted. 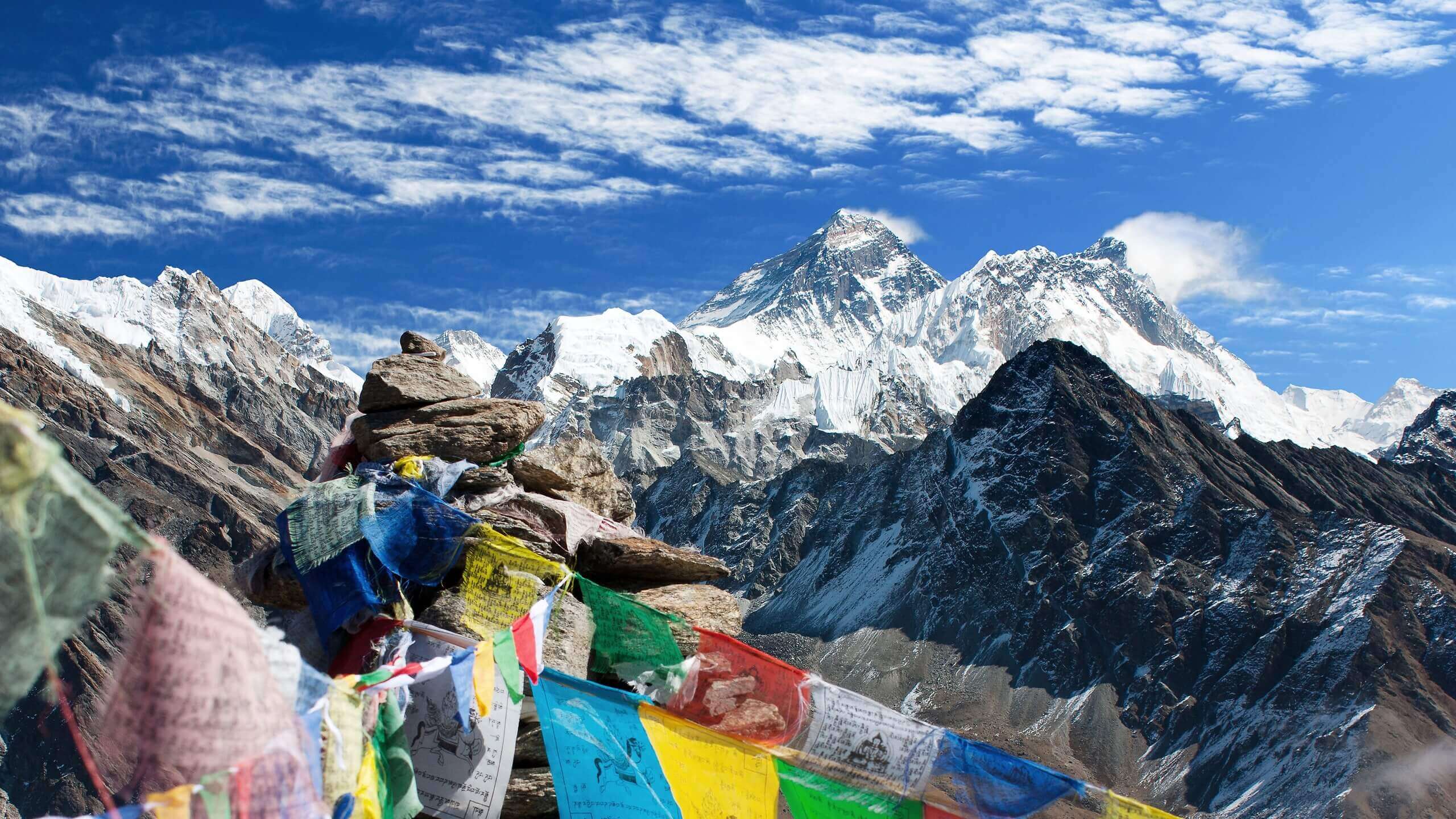 Throughout the park, there are pine, oak, and rhododendron forests. Lhotse, Cho Oyu, Thamserku, Nuptse, Amadablam, and Pumori are just a few of the towering peaks seen From the park. The diversified landscape, rugged terrain, and massive rocks will captivate you. The amusement

The world’s most popular hiking excursion

The Everest region is the most developed and well-managed, with a significant number of charming tea houses and high-quality lodging and dining options, as the tourism industry provides the majority of the people’s income. The trekking pathways are distinct and are thought to be safe.

Why is Everest Base Camp so popular?

Everest Base camp is popular for being the gateway to climbing Everest.

Is trekking to Everest Base Camp worth it?

Yes, Trekking to Everest Base camp is definitely worth a shot.

What are the main challenges of the trek to Everest Base Camp?

The main challenge of this trek would be the high altitude as it makes the air dense and won’t be suitable for people with breathing problems.

Why should you visit Mount Everest?

Not just being the highest mountain in the world, Everest is also the best escape to nature and panoramic views.