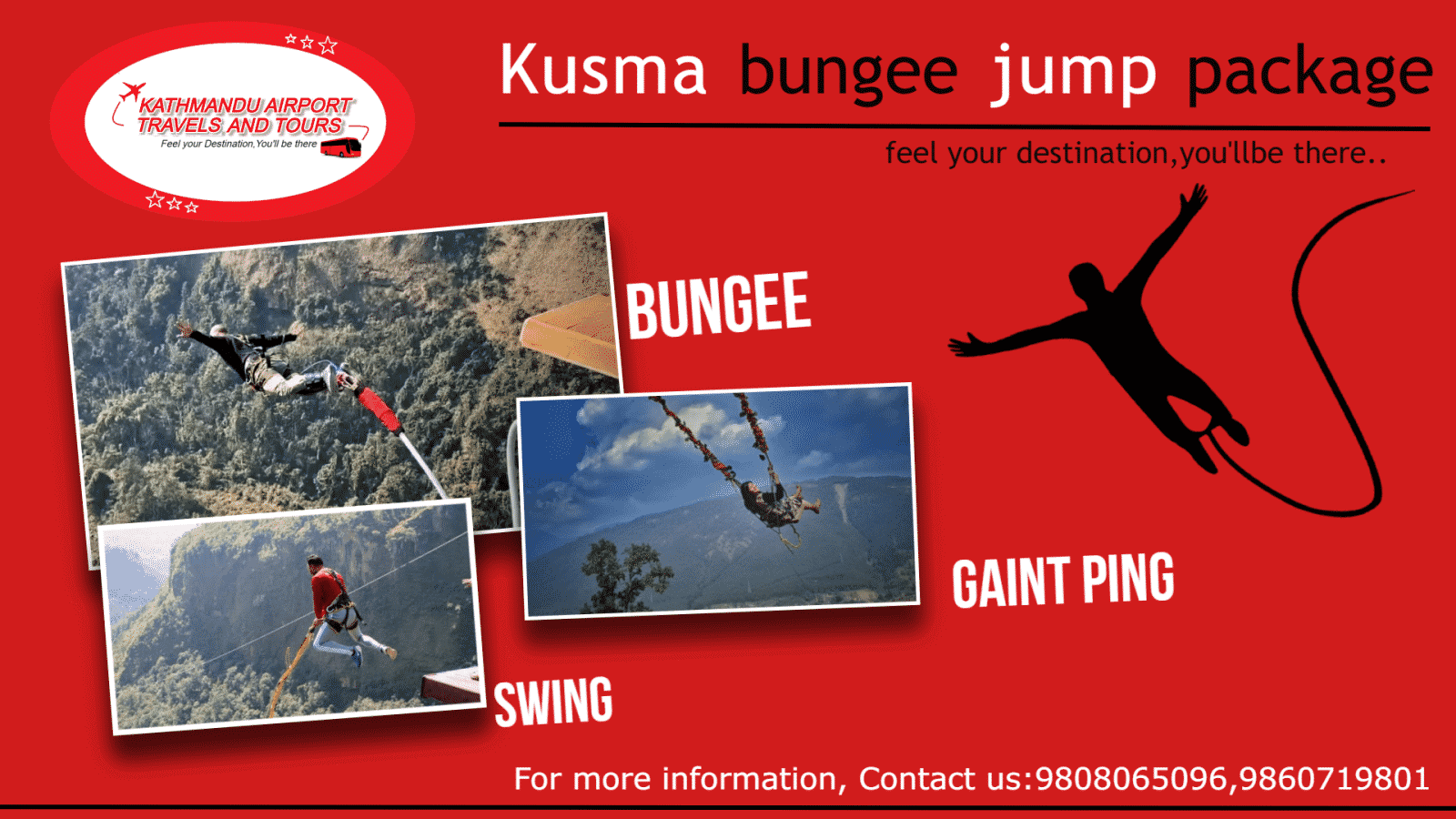 The Bungee jumping is an Adventure sport for the people who dare challenges and Nepal is a perfect spot for the jump as the country is blessed with naturally built Bungee site.

Bungy jump in Nepal is quite famous adventure activity adored by many native youngsters and foreigners.

This tiny nation is not only well recognized for Everest and birthplace of Buddha; it possesses suitable environment for wide dimension of adventures activities to make adrenaline junkies vacation memorable.

There are three spots for Bungee Jumping in Nepal. One is at Bhotekoshi, one at Pokhara, and another one at Kusma.

Bungee Jumping in Nepal is one of the most popular adventurous activities. The world’s second-highest, most exciting and thrilling Bungee Jumping lies in the Kushma Parvat district of Nepal.

Along with the astounding panoramic views in the Kaligandaki gorge amidst the Annapurna and Dhaulagiri mountains, lies the Kushma’s suspension bridge from where the Bungee Jumping is into operation.

The bungee Jumping spot resides in the 520 m. long suspension bridge which connects Kushma of Parvat to the Balewa of Baglung. The total height of Bungee Jumping is 228 m.

Based on the gorge of the Kali Gandaki river, Bungee jumping in Kushma is one of the most adventurous activities comprises of the mind-blowing natural settlement.

Bungee Jump in Bhotekoshi is ranked among one of the world’s longest Bungee Jumps. It’s Asia’s 3rd highest Bungy jumping . The height of Bhotekoshi bungee Jump is 160 meters.

The bungee at BhoteKoshi River is operated by The Last Resort located on top of a gorge to the Tibetan Border. Luxurious safari tents are set in lush gardens for a peaceful stay in an exotic setting. 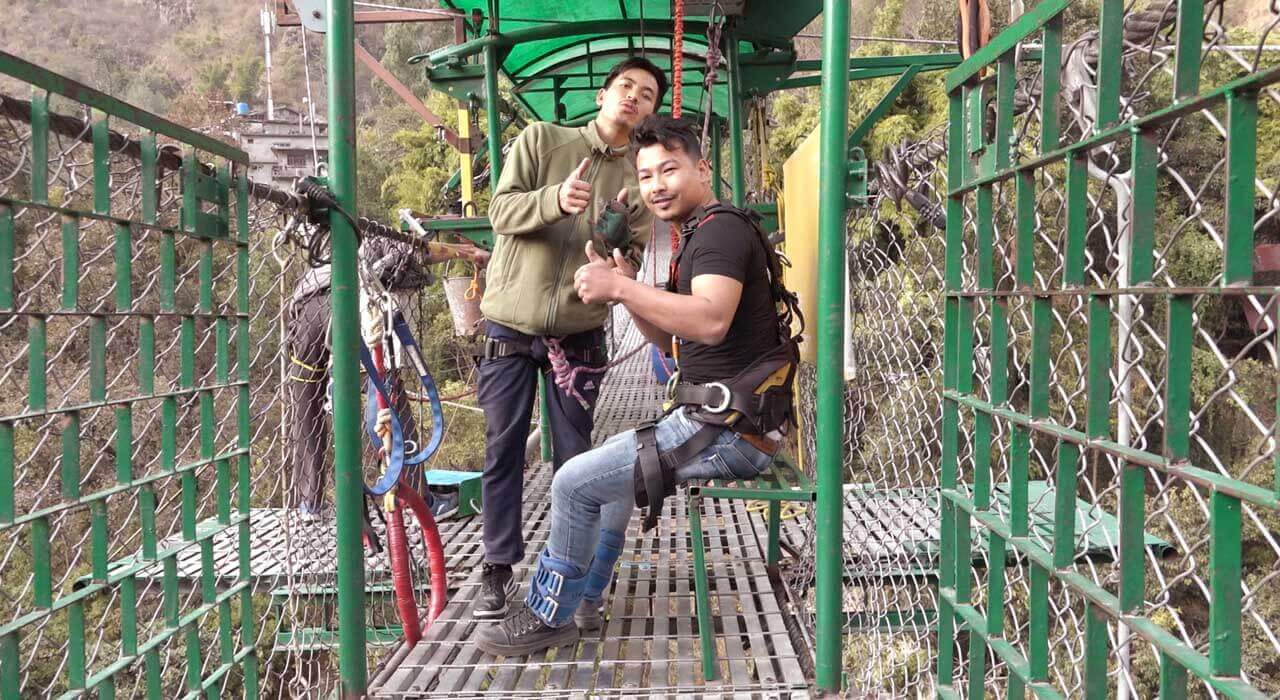 The Bungee bridge happens to be the only privately-owned bridge in Nepal. It has been specially designed for bungy jumping with a 4x-safety factor and has a loading factor of 41,500 kg or 4.5 tons according to Swiss measurements.

Anyone who wants to take a taste of bungee jumping should not have any of the health problems mentioned below:

Bhotekoshi Bungee Jump Price For Nepali Citizenship and Other Foreigners:

Pokhara is a famous tourist area, and almost every person visiting Nepal will not miss this place. Pokhara is the place gifted by God and famous for different kinds of Adventure. Now, to make it more adventurous, you can do bungy jump in Pokhara.

Pokhara Bungee Jumping is the highest water touch Bungee in the world. This bungee jumping is made from a tower which is at the height of 80 meters from where you dive to the pond 18/20 meter deep.

Bungee jumping trip in Pokhara. You can get full enjoyment there doing Bungy jumping, making videos, taking pictures and viewing nature around you.

Pokhara is a lovely place in Nepal. As well as the capital of the touristy city for the traveler. Nepali people travel to Pokhra then they never forget.

Price of Bungee Jump in Pokhara:

Where is the Kushma Bungee Jumping Site?

Kushma Bungee Jumping Site lies in the Kushma, Parvat, Nepal. Kushma bungee jumping site is the finest destination and only 60km away from the famous tourist city, lake valley Pokhara and 262 km away from the capital city Kathmandu.

You can get to the Kushma Bungee jump directly from Kathmandu and Pokhara through public vehicles, private and luxury vehicles. Many people love to drive motorbikes from Pokhara, which is a bit scary and less safe than traveling via four-wheeler. You can contact luxury holiday Nepal for a private tourist vehicle with a driver and an airplane flight.

Bungee jumping in Kusma can be done around the year, however, some of the months are too suitable for the views and scenery and some months are not so similar and convenient for the adventure seeker.

Normally, the monsoon season is considered as the least suitable for the jump, which starts in June and lasts until August. The remaining seasons like Summer, Spring, and Winter are the most suitable for the Bungee jump in Kusma.

What is the Cost of Kushma Bungee Jumping?

The price of the Kusma Bungee Jumping is now available publicly since it came into operation from the end of October 2020. The cost of Bungee Jump for Foreigners and Nepali are listed below.

The cost includes the cost of activity, life insurance, and all the government taxes and charges. Additional charges for photos and videos are also listed.